There’s nothing that makes you feel more old than when someone says, “I’ve never read X-Men or seen any of the movies.” And you suggest seeing the first one because it’s fantastic, and their response is they weren’t born yet when that came out. 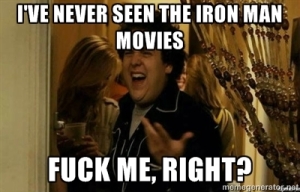 Yeah… that’s right. Well, just know they were amazing and if you can’t get behind any of those old movies, take a gander at the latest installment of the new series.

The idea behind it all was we need superheroes who are not traditional superheroes, in the sense that powers don’t always make your life better while remaining anonymous:

But also that real people have real problems and we need to connect to real people by having our character deal with real world problems.

The central plot revolves around a world where some people develop what is known as the X-gene, an unknown piece of genetic material that allows people to display an array of powers from telepathy to regenerative healing factors. Though most normal humans heavily debate the civil rights of mutants, Professor Charles Xavier houses young mutants in his Mansion and teaches them how to develop their gifts for the prosperity and equality between humans and mutants. His archnemesis Magneto (also known as Max Eisenhardt) argues that there will always be conflict between humans and mutants and that the only way to ensure the continued progeny of mutants is to eliminate all normal humans.

Now in current years Magneto has actually been a “good guy” in the sense that he helps the X-Men a lot and is not as crazy with the Brotherhood of mutants. But Stan Lee figured out why X-Men are so popular 50 years ago, and that idea still works today.

What diversified X-Men from other team books like Justice League or International Justice League from DC Comics is that Lee used comics as a way to both entertain and educate the youth in America. He did so by exploring issues of racial discrimination, drug use, and other societal ills as a subliminal form of social commentary. The X-Men were an especially powerful message used as an allegory to expound on the civil rights movement of the 1960s between African-Americans and Caucasians. Professor X represented the peaceful, moderate view of equality between all races displayed by Martin Luther King Jr. and Magneto represented the more violent and combative tactics of Malcolm X. While both championed for the rights of African-Americans (and their counterparts for Mutant rights), the ways in which they sought their freedom were drastically different.

But the most significant part of these stories is Stan Lee’s framing of the mutant rights’ discussion, never completely setting either party at fault, but always trying to bring both groups to the middle. When Lee was interviewed in 2008 for the Uncanny X-Men 500th issue he said, “I did not think of Magneto as a bad guy. He just wanted to strike back at the people who were so bigoted and racist… he was trying to defend the mutants, and because society was not treating them fairly he was going to teach society a lesson. He was a danger of course… but I never thought of him as a villain.”

It was in this same year that the graphic novel The Magneto Testament was published, confirming indefinitely that Magneto was a Jewish holocaust survivor. The cast of characters involved have been praised time and again for their representation in offering unique and varied perspectives from multicultural characters and their character defining backgrounds. The X-Men comics continue to frame mutant rights’ in a way that is representative of current conflicts of racial discrimination, sexual orientation, and other forms of bigotry and prejudice. Though the team roster has changed dozens of times, the message relayed is the same.

This weblog is published by students in JOU 3002 – Introduction to Multimedia Journalism at Eastern Illinois University in Charleston, Ill. It is a laboratory exercise and should be understood as such.

Experimentation, expression, creativity and credibility are central to the course, and will be represented on this site.